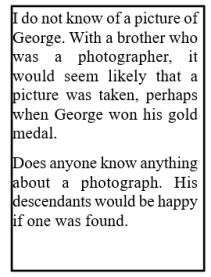 George was the middle child of the family, with three older brothers and two sisters and a brother younger than him. Even as a young farm servant, George had scientific knowledge extraordinary for a farm servant then. He was walking home to Gourdas from the farm where he was working with his bundles of dirty washing slung over his shoulder one wintry Saturday night when he saw a star where there should not have been a star. He took out his pocket telescope and had a look and saw that it was a comet. This was 1858 and he had spotted Donati’s comet, something that was causing interest among astronomers. He continued all his life to build his knowledge of astronomy, geology and botany.

Like his brothers, he had a basic education but he built on this by reading. A friend recalled that George was never without a book. If he had a distance to travel with a horse and cart he might do so while reading. The brothers subscribed to a monthly magazine called Hardwicke’s Science Gossip. This gave them access to articles on all aspects of science. It also allowed them to contribute notes of some of their natural history observations. They used the journal to offer swaps for natural history material such as microscope slides or advertise for books they wished to add to their library – books such as Practical Microscopy, The Insect World, Cassell’s Popular Science.

When the family left Gourdas in 1903, George went to live at Nigg, south of Aberdeen. Now retired from work on the farm, he became a professional taxidermist possibly working at Ballater or on the Mar Estate on Deeside. There are family traditions that some of his work may have gone to Balmoral, the Royal Family’s Deeside home, but no confirmation of this has yet been found. See John Findlay.

George was 13 and just leaving school in 1859 when Charles Darwin’s Origin of Species was published so his natural history observations and studies were carried out when these new ideas were being publicised and discussed. With the extent of his reading, George could hardly have failed to know about and think about them. He clearly had his own opinions. As a friend wrote: ‘He held very decided opinions on many subjects connected with natural history, and when once convinced by practical experience and sound reasoning that he was right, nothing short of a charge of dynamite would have made him alter his views’.

George was an award-winning taxidermist and a respected naturalist.